The Educator had brought in many different sizes of left over Styrofoam from home and placed it on the table.  She had no expectations on how the children would use the materials provided, but she did not expect what was going to take place over the next ELEVEN days!!!

A young boy came into the room and decided to add paint onto the Styrofoam; this was just the beginning of day one!  On day two he had added some popsicle sticks and another little friend decided to come and work next to the young boy.  Every day that this young boy came into the centre he added more and more to his amazing masterpiece.  Some of the materials were pinecones, feather, sparkles, plus much more.

Not only was he working on this project at the centre, he had been working on it at home as well and then would bring pieces to the centre to add to his project, such as a roof that he made out of paper and decorated it.

On the final day the boy said, “Ok I’m DONE,” with a huge smile on his face.  He had worked on this project just shy of one month and it was very noticeable all the hard work he had put into his masterpiece.  When he described his work he had said he made a, “Town with trees, a house, a roof, and it even has a chair that goes up and down for when you need your hair cut.”

When he was all done with the amazing masterpiece we placed it up high for all to see and to be inspired by!!! 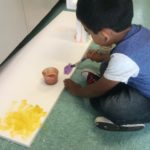 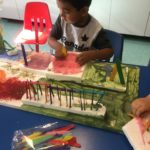 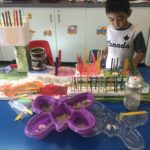 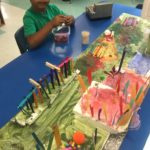 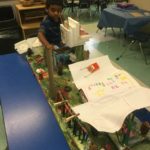 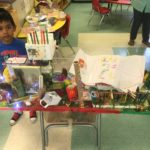 Which then lead to others following in his footsteps.