A Boy and His Ice Cream

While working at the play dough station a Boy started to make what appeared to be an ice cream, but for confirmation the Educator asked the Boy what he had made.

The Boy looked at the Educator, with a smile, and responded, “ICE CREAM!” with a voice full of excitement.

After he placed the cherry on top he lifted the ice cream play dough towards his mouth and pretended that he was licking the ice cream.  He then turned to the Educator and said, “YUM!!!  It’s chocolate.”

When he was done pretending to eat the ice cream he said, “All gone,” and squished the play dough down. 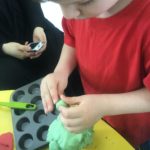 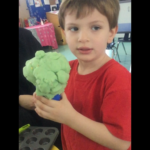 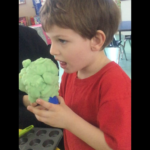 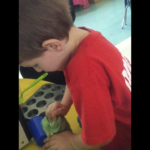