The Educator had a few trays lined up on the table with a bottle of shaving cream.

Boy A walked over and said, "What is that stuff?"  The Educator said, "It is shaving cream."

Boy A and Boy B decided they wanted to share a tray.  Boy B said, "Boy A is my best friend," and Boy A said, "We want to do it together that's cause Boy B is my best bud."

Then Boy C walked over to Girl A and decided he wanted to share a tray with her.  All four children quickly started to explore with the shaving cream.

Girl A said, "It feels so soft."  Boy A said, "Ya, like the clouds."  Girl A said, "Can I jump in the clouds?" and they all started to laugh.  Then Boy A and Boy B started to rub the shaving cream up and down their arms.

Boy C started to make letters using his finger.  He said, "Look Miss, S is for my name."  He continued to write many letters until he spelled his entire name.  The Educator said, "Did you write your name?  It looks great, I can see."  He smiled and continued to stare at his name on his arm.

Meanwhile Girl A grabbed all the shaving cream in her hands and started to squish it.  She said, "Oh, it's so squishy."

After about 15 minutes Boy A and Boy B decided they were done.  Girl A said, "Ya, me too."  But Boy C continued to explore with the shaving cream.  He would rub it up and down his arms then clap his hands together so that it would fly all over.  He did this several times and would laugh and smile throughout the process.  Boy C then decided he was done and said, "All done!"  He walked towards the bathroom and washed up. 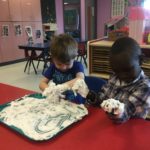 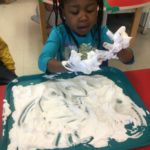 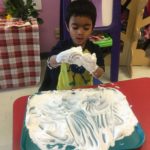 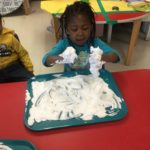 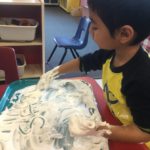 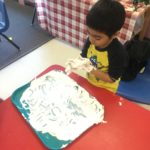