After all our families and friends were done making play dough, Steven decided he wanted to make an ice cream bar with the play dough and a rolling pin.

He took a big chunk of play dough and carefully wrapped it around the rolling pin and said, "Look, an ice cream treat!  Pink flavour!  I want to put some sprinkles on it."

The Educator said, "Ok, you can dip it in the sensory table if you would like."

Steven dipped his ice cream bar in the sensory table full of coloured rice and said, "Look!  Ice cream and sprinkles, yum!"  He pulled it out and pretended to lick the ice cream bar. 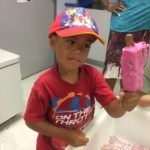 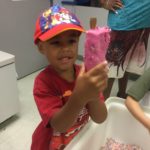 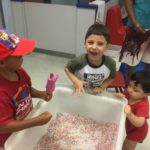